On the Normandy Cheese Trail

The village of Camembert in Normandy, a stop on the author's explorations.

“Once upon a time, there was triple crème in Normandy,” said François Olivier, a fourth-generation cheesemonger in the Norman capital of Rouen. Standing beside the glass counter of his family-run fromagerie,opened in 1907, Mr. Olivier gestured at an impressive array of Normandy’s dairy products, from raw-milk Camembert to unpasteurized butter and cream from the region’s mottled Normande cows.

But was there a local triple crème, the cream-enriched cheese of my dreams, with a sky-high fat content (at least 75 percent butterfat) and a milky-white, soft-ripened rind?

No. The cheese that lured me to Normandy was nowhere to be found.

The French region of Normandy is a diverse expanse of coastal hamlets and chalky cliffs, rolling meadows and sleepy villages of half-timbered houses northwest of Paris. It had crossed my radar often, from the history of Joan of Arc’s demise and the D-Day beach invasions in 1944 to the tourist-brochure beauty of Mont Saint-Michel.

But my curiosity about Normandy’s cheese was more recent, beginning in a Stockholm outpost of Androuet, a chain of specialty cheese stores. The original shop, founded in Paris in the early 1900s by the enterprising Henri Androuët, was among the first to source cheeses from across all of France. The shop in Stockholm does the same on a much smaller scale, anditsupplied my first taste of the buttery triple crème known as Brillat-Savarin.

“It’s from Normandy,” the Swedish cheesemonger had told me three years ago, when I had just moved to the neighborhood.

A half-truth, I later learned.

The triple crème’sstory does indeed begin in Normandy, where it was created by the Dubuc family in the late 1800s. In the 1930s, Mr. Androuët rechristened it in honor of Jean Anthelme Brillat-Savarin, the celebrated 19th-century epicure and fromage fanatic. Androuet’s website posits that Brillat-Savarin is the oldest cream-enriched French cheese that is now industrially manufactured mainly in Burgundy.

So what’s being produced from the Normande herds today? To find out, I spent a few blustery days at the end of January sloshing through the muddy back roads of central Normandy with a friend who also was prepared to eat her weight in raw-milk cheese.

Before the trip, in Paris, I stopped at Fromagerie Goncourt, an artisanal shop in the 11th arrondissement, to talk toowner Clément Brossault, who possesses a wealth of cheese knowledge.

“Normandy has always been really connected with Paris,” Mr. Brossault said, noting its proximity and ease of transport to the capital’s main food market.

While a team of cheesemongers assisted customers drifting through the door, Mr. Brossault recountedhow he had biked around France to meet the farmers and artisan producers who would later supply his shop. But only a few of those days were devoted to Normandy.“It’s true that we know some regions better than Normandy,” he said. “Because for us, it’s less exotic.” 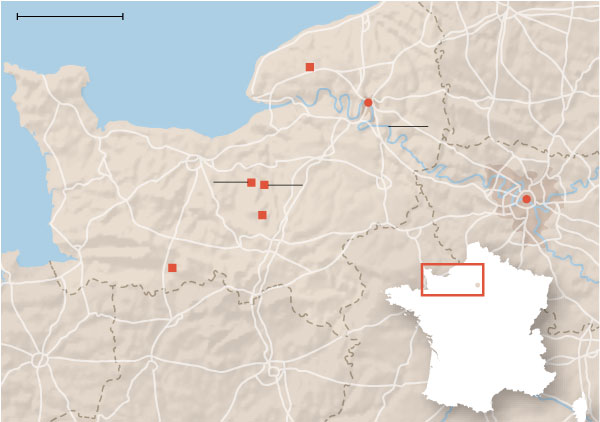 Why roam through the backyard of Paris when you can play in the Pyrenees?

The last,Camembert de Normandie, is among the most popular French cheeses — a funky, creamy, raw-milk cheese that bears little resemblance to the rubbery pucks sold in American supermarkets. Recently, large dairy corporations have been swallowing up small producers in Normandy and elsewhere, threatening the future of artisan farmhouse Camembert and arousing strong feelings.A controversial agreement in February to allow pasteurized-milk Camembert to bear the same A.O.C. status further fueled the flames.

“To understand Normandy, it’s important to see that you have two sides,” Mr. Brossault said of the changing cheese landscape. “But the industrial side can be really good, too.”

I took him at his word and made our first stop in Normandy at Fromagerie E. Graindorge, a cheesemaking factory and tourist attraction in the rural Pays d’Auge region. It was an easy hourlong drive from the city of Caen (after a two-hour train ride to avoid Parisian traffic) that took us through a patchwork of apple orchards and rural farms. Founded in 1910 as a family-owned operation, it was sold in 2016 to the multinational dairy corporation Lactalis. Today, the factory continues to produce the four A.O.C. cheeses, along with some non-A. O. C. and pasteurized varieties.

The commercial complex is surrounded by startlingly green farmland just outside the small village of Livarot. It welcomes visitors with an educational center and a self-directed tour through the factory that culminates with a tasting. The tour begins with a short video about the fromagerie’s history (in French, with English subtitles) and continues through a glass passageway above the fluorescent production facilities. Peering through large windows, we spied workers in white aprons and hairnets in a vast milk-processing hall, various aging rooms and atesting lab. Farther along, square boxes of Pont-l’Évêque flew through a labyrinthine labeling machine. In another room, two workers deftly wrapped and hand-tied reeds around wheels of pungent Livarot, the traditional method to help the soft, washed-rind cheese retain its shape.

Exiting through the gift shop, we passed a large refrigerated case filled with Graindorge cheeses, four of which were cut into bite-size pieces for sampling. The cheeses varied in pungency but it was impossible to decipher the nuances; chilling cheese inhibits flavor. So I bought two wheels to sample later: an earthy raw-milk Camembert de Normandie and a slightly sweet, drier Camembert au Calvados made with local apple brandy.

The experience was altogether different the next day when we pulled up outside Fromagerie Durand, the only artisan producer of Camembert in the village — a handful of timber-frame houses clustered on a grassy hillside like a herd of grazing cattle — for which the cheese is named. Instead of a slick cheesemaking factory, this was a get-your-boots-dirty farm; the cheeses made here are not only A.O.C., but also “fermier,” which means that allthe milk comes from the farm’s own cows. The use of milk from a single herd rather than several results in cheeses with terroir and subtle differences that change with the seasons.

At Durand, there was also a self-guided tour of sorts, in the form of weatherworn placards nailed to the outside of the building that outlined the cheesemaking process. Through dusty windows, visitors could peek into the drying and aging rooms and watch workers filling Camembert molds by hand. In the adjoining shop, we found the owner, Nicolas Durand, in muddy overalls and rubber galoshes taking a break to read the newspaper. During busier months, the fromagerie offers tasting sessions for visitors, but we contented ourselves with a Camembert de Normandie to go, a bold cheese with the aroma of its barnyard origins.

And so went our days, accumulating cheeses as we drove through the rolling hills of the Pays d’Auge, past small-town war memorials and grand half-timbered manor houses on winding back roads dotted with signs for local Calvados and apple cider.

In the evening, the spoils were spread across a hotel coverlet: a Camembert or two, a square of mild Pont-l’Évêque, at least one bottle of cider and baguettesfrom a village boulangerie. Typically, we favored the Camemberts — creamy and full of flavor — but an unexpected contender emerged when we tasted a Deauville, a rich cousin of the Pont-l’Évêque with an orange-hued rind and a powerful aroma that belied its balanced flavor. By chance, we had plucked the Deauville from an office fridge at Fromagerie de la Houssaye, a small producer outside Boissey on a dirt road that was much too narrow to accommodate both my Opel rental and a steel tanker truck transporting milk.

On our final morning in Normandy, we headed north across the Seine to meet Charles Bréant, a dairy farmer, cheesemaker and one of the five brothers behind Camembert Le 5 Frères. At the end of a muddy road outside Bermonville, a town in the Seine-Maritime département of northeastern Normandy, we stepped out of the car to an enthusiastic chorus of mooing.

Less than two years ago, Mr. Bréant began producing Camembert Le 5 Frères, a raw-milk farmhouse cheese, with milk from the family dairy farm. “When we sell milk to industry, we decide nothing,” said Mr. Bréant, who apprenticed at Ferme du Champ Secret, one of the fewfarmhouse producers in Normandy making organic Camembert with raw milk from their own Normande cows.

Despite misgivings about my footwear (sneakers that are no longer white), Mr. Bréant showed us around the farm with Lucky, an energetic brown-and-white fox terrier, following close behind. After meeting the prized cows, we put on white lab jackets, hairnets and Smurf-blue shoe covers to tour the cheesemaking facility, where a single worker methodically ladled Camembert molds by hand.

“It’s a difficult product to make,” Mr. Bréant said, noting that the farm can make only 200 cheeses per day.

Although the production of Camembert Le 5 Frères follows the exacting A.O.C. standards, the farm’s location, in Seine-Maritime, disqualifies the cheese from the A.O.C. “Camembert de Normandie” certification. “For consumers, it’s a gauge of quality,” said Mr. Bréant of the A.O.C. stamp, which he hopes willbe extended to this part of Normandy. For now, he’s appealing to customers who value artisan farmhouse products — A.O.C. or not — and, in response to demand, began offering farm tours this summer.

The cheese’s colorful label — “5 Frères,” in large type above geometric wedges of royal blue and white — caught my eye later that afternoon at François Olivier’s cheese shop, where it stood out from the other packages of traditional Normandy cheeses.

So strong anddeliciously funky, in fact, that I thought better of hauling that final Camembert with us on the return trip to Paris. Some things — like Normandy’s farmhouse cheeses — are best consumed at the source.

Many cheesemakers in Normandy welcome individual visitors, and some offer tours and tastings. To see the production process, time your arrival for a weekday morning.

Ferme du Champ Secret (Champsecret; fermeduchampsecret.com) opens for public tours and tastings (in French; 3 euros) once a week during the summer.

Most Sunscreens Can Harm Coral Reefs. What Should Travelers Do?

On Croatia’s Coast, Stunning Pools and a Mediterranean Mood

How to Go to Cuba Now

How to Enjoy Brooklyn’s Prospect Park